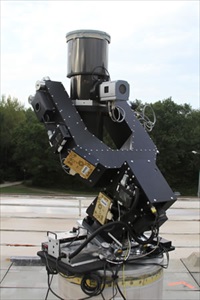 As the worldwide race to discover Earth-like exoplanets accelerates, Andor's expertise in high-performance digital camera design and manufacture is proving crucial for many of the leading groups in the field.

SuperWASP (Wide Angle Search for Planets) has proven to be one of the most successful projects, finding more than a third of all confirmed transiting planetary systems through its two telescopes, each equipped with eight Andor iKon-L cameras. Its successor, the Next Generation Transit Survey (NGTS), aims to build on those successes through a twelve-strong array of telescopes at the European Southern Observatory in Chile, equipped with custom-designed, red-sensitive CCD cameras from Andor. Compared to SuperWASP, NGTS will extend the limits of detection from giant Jupiter-like planets into the Neptune and super-Earth regime.

"The rollout of the NGTS programme follows successful trials with two prototype instruments that demonstrated white noise characteristics to sub-mmag photometric precision," says one of NGTS' Principle Investigators, Dr Peter Wheatley from the University of Warwick. "Having had great success with the Andor cameras in SuperWASP, we chose to work with Andor on our NGTS camera. Our requirement was for large-format, deep depletion CCDs but we were unaware of any manufacturer offering these off-the-shelf. However, Andor offer smaller format (1k x 1k pixel) deep depletion detectors as a catalogue item, so we paired up two of these for our prototype instrument we operated during 2010 before going ahead and ordering the custom units.

The space-borne Kepler probe has shown that exoNeptunes and super-Earths are very common but most of the examples found so far are too faint to be followed up to measure their composition and atmospheric properties. NGTS will search a sky area more than 16 times greater than Kepler, covering many more bright stars, to find planetary systems that are suitable for follow up with larger telescopes such as VLT or, when it arrives, ELT.

"Andor were very helpful when it came to custom design work," says Wheatley. "For instance, we changed the standard window for one with high near-IR throughout. We also changed the camera shutter to accommodate the f/2.8 beam from our telescope and we changed the faceplate of the camera to allow a custom interface to our telescope. Now, our detailed simulations based on the performance of the prototype telescope predict that when we begin scientific operations in 2014 about thirty bright super-Earths and up to two hundred Neptunes could be discovered. We have been pleased by the support we received from Andor," concludes Wheatley.

According to Colin Duncan, an imaging application specialist at Andor, "Our high-performance scientific cameras have found a special place in this very exciting field of discovery. As well as the iKon-L CCD camera used by SuperWASP [www.superwasp.org] and the custom-designed CCD cameras for NGTS, Kennet Harpsoe's Stellar Observations Network Group (SONG) is building their global network of robotic one-metre telescopes around the ultra-sensitive iXon 897 EMCCD camera(2). The ground-breaking improvement in spatial resolution offered by the iXon 897 was also instrumental in Jesper Skottfelt's latest discovery of two new variable stars in the crowded central region of the globular cluster NGC 6981(3) and we are delighted to be playing such a pivotal role."

In the 17 years since the discovery of the first planet in orbit around another star, more than 600 exoplanets have been detected. However, almost all are giant planets orbiting close to their parent stars and telescopic detection of small Earth-like objects capable of supporting life has remained difficult. The transit technique is the most widely used exoplanet detection technique, searching for shallow dips in the brightness of a star as one of its planets pass across its face. It only detects the subset of planets with edge-on orbits as viewed from Earth but the strength of the technique is that it is the best way to measure the radius of a planet, since the larger the planet the more light it blocks.

Super-Earth is the term given to describe an exoplanets between the size of Earth and Neptune, objects that Kepler has demonstrated to be very common. Super-Earths covers a host of different planet types, from rocky planets like the Earth, to water/ocean planets, to ice giants like Neptune.