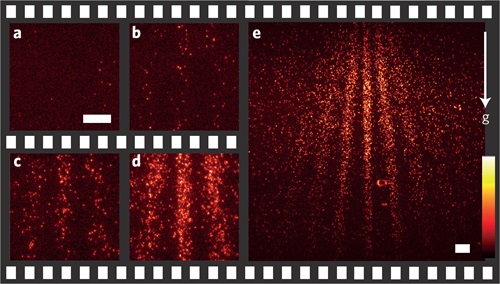 Described as the "most beautiful experiment in physics", Richard Feynman spoke of the double-slit experiment as 'the heart of quantum physics', emphasizing how the diffraction of individual particles at a grating is an unambiguous demonstration of wave-particle duality and contrary to classical physics. Matter-wave interference has been observed for almost 90 years, first for electrons, neutrons, atoms, and small molecules. The first single-electron/double-slit experiment to back-up Feynman's assertion that an individual electron itself can behave like a wave was reported by Tonomura's team in 1989.

Recently published international research led by Professor Markus Arndt at the University of Vienna, Austria, also shows the diffraction of single, massive molecules at a grating in an unambiguous demonstration of the wave-particle duality of quantum physics. However, unlike the interference patterns created by photons and electrons that are irretrievably lost in the detection process, Thomas Juffmann et al [1] used fluorescent molecules and nanometric detection accuracy to provide clear and tangible evidence of the quantum behaviour of large molecules in real time.

"The study of duality in large molecules requires a sufficiently intense and coherent beam of slow and neutral molecules, a nanoscale diffraction grating, and a detector that offers a spatial accuracy of a few nanometres and a molecule-specific detection efficiency of close to 100%", says Professor Arndt. "We used a laser-controlled micro-evaporation source to produce a beam of phthalocyanine and phthalocyanine-derivative molecules with masses of 514 AMU and 1,298 AMU respectively. The high-mass molecules were specifically synthesized by Jens Tuexen and Prof. Marcel Mayor at the University of Basel. Gratings were machined in 10-nm-thick silicon nitride membranes by the team around Prof. Ori Cheshnovsky at Tel Aviv University. Wide-field microscopy then detected the position of each molecule with an accuracy of 10 nm.

"Vitally, the high detection efficiency of the Andor iXon 885 EMCCD camera allowed us, for the first time, to optically visualise the real-time build-up of a two-dimensional quantum interference pattern caused by individual molecules arriving at the detector. In addition to providing this particularly clear demonstration of wave-particle duality, our approach could also be used to study larger natural and functionalised organic molecules, and also quantum dots, to explore the boundary between quantum and classical physics."

According to Colin Duncan, physical sciences application specialist at Andor, "The iXon 885 low light EMCCD camera offers the highest sensitivity from a quantitative scientific digital camera, particularly at fast frame rates. The megapixel sensor format and 8 x 8 μm pixel size presents an attractive combination of field of view and resolution, while a full resolution frame rate of 31 frames/sec is achievable. Unlike other EMCCDs, the 885 is non-aging and does not require routine EM gain recalibration with RealGain™ provides linear 1000-fold EM gain multiplication."

Andor is a world leader in Scientific Imaging, Spectroscopy Solutions and Microscopy Systems. Established in 1989 from Queen's University in Belfast, Northern Ireland, Andor Technology now employs over 340 people in 16 offices worldwide, distributing its portfolio of over 70 products to 10,000 customers in 55 countries.

Andor’s digital cameras, designed and manufactured using pioneering techniques developed in-house, allow scientists around the world to measure light down to a single photon and capture events occurring within 1 billionth of a second. This unique capability is helping them push back the boundaries of knowledge in fields as diverse as drug discovery, toxicology analysis, medical diagnosis, food quality testing and solar energy research