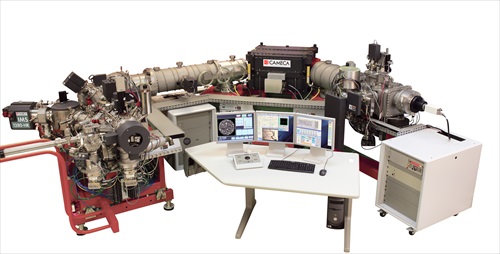 A research team made up of scientists from Brown University, the Carnegie Institution for Science, and Case Western Reserve University has determined from lunar samples brought back by the Apollo 15 and 17 Moon missions that water from the interiors of the Earth and the Moon has a common origin.

The team examined melt inclusions found in the lunar rock samples. Melt inclusions are tiny dots of volcanic glass trapped within rock crystals that prevent water from escaping during eruptions. They provide a unique snapshot of the Moon’s interior composition.

Team members at the Carnegie Institution in Washington relied on a CAMECA NanoSIMS 50L multicollector ion microprobe to measure the amount of deuterium, a hydrogen isotope that is found in varying amounts in water depending upon where the water molecules originated in the solar system.

The team’s measurements revealed that the hydrogen isotopes in the lunar rock originate in a type of meteorite called carbonaceous chondrites that match the Earth’s water suggesting that the two celestial bodies obtained their water from the same source.

Similar measurements were made previously by a research team consisting of scientists from UCLA, the University of Tennessee, Wesleyan University and Hokkaido University (Japan) using a CAMECA IMS 1280 ultra-high sensitivity ion microprobe.

This team also identified water and characterized the hydrogen/ deuterium isotopic composition in lunar rocks. Its results suggested other sources for water in lunar rocks, including lunar mantle, solar wind protons and comets.

Current scientific theory proposes that the Moon was formed from a massive disc of debris that resulted when a Mars-sized object hit the Earth 4.5 billion years ago. Although heat from the impact should have caused hydrogen and other volatile elements to boil off into space, evidence now suggests that the Earth was already wet at the time of the Moon-forming impact and that the water within the Moon was inherited from the Earth.

“The measurements themselves were very difficult, but the new data provide the best evidence yet that the carbonaceous chondrite meteorites were a common source for the water in the Earth and Moon, and perhaps the entire inner solar system,” notes Erik Hauri of the Carnegie Institution.

CAMECA’s NanoSIMS 50L ion microprobe proved uniquely capable of analyzing lunar melt inclusions.  It offered the research team several key performance features that no other single instrument could provide. These include high spatial resolution (down to 50 nanometers), high sensitivity for all elements from hydrogen to uranium and above (parts per million in elemental imaging), high mass resolution, and parallel acquisition of up to seven elements or isotopes.

CAMECA has more than 50 years of experience in the design, manufacture and servicing of scientific instruments for material micro- and nano-analysis. Since pioneering Electron Probe Microanalysis (EPMA) instrumentation in the 1950s and Secondary Ion Mass Spectrometry (SIMS) in the 1960s, CAMECA has remained an undisputed world leader, while achieving numerous breakthrough innovations in such complementary techniques as Low-energy Electron-induced X-ray Emission Spectrometry (LEXES) and Atom Probe Tomography.

More recently CAMECA has successfully evolved from a manufacturer of scientific instrumentation for the international research community to a provider of metrology solutions for the semiconductor industry. Headquartered near Paris, CAMECA has offices in China, Germany, India, Japan, Korea, Russia, Taiwan and the United States along with a global network of agents. It is a unit of the Materials Analysis Division of AMETEK, Inc., a leading global manufacturer of electronic instrument and electromechanical products.