Scientists turn on gene without creating a GMO

Rothamsted scientists have found a way to switch on a dormant gene without inserting foreign DNA and creating a GMO, as would usually be the approach.

This is the first such demonstration using a gene editing ‘deletion’ approach in any organism, with previous methods not managing this feat in such a precise and predictable way.

The hope is this technique could be adapted to a variety of situations where plant breeders want to turn genes on, rather than just turning them off, as is often needed for crop improvement.

Professor Peter Eastmond and colleagues used CRISPR/Cas9 genome editing – which is usually used to switch genes off – to bring the gene in question under the control of an existing gene promoter, which then acts as its new genetic ‘on-switch’.

He said: “Achieving ‘gain-of-function’ phenotypes without inserting foreign DNA is an important challenge for plant biotechnologists. Here we show that a gene can be brought under the control of a promoter from another gene by deleting the intervening genomic sequence. It’s a tough thing to do, but we’ve come up with a simple solution to a difficult problem. 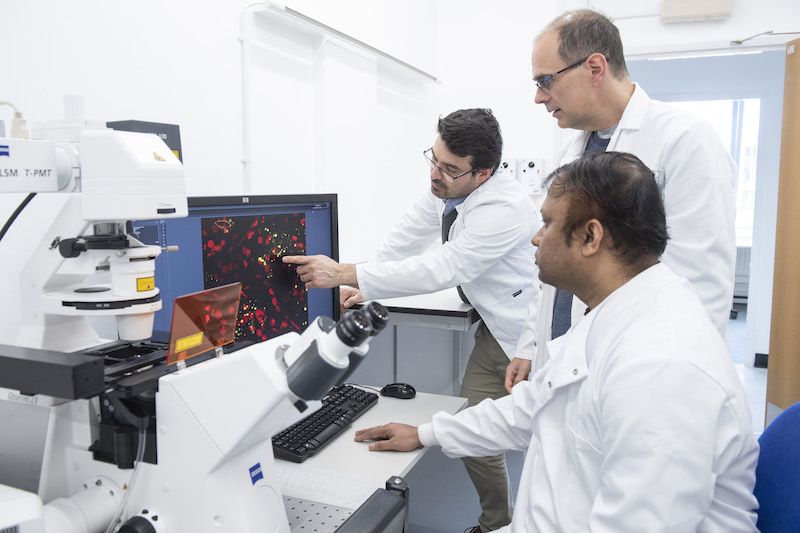 “There are many barriers to commercialisation of GM crops and so it may be desirable to achieve gain-of-function by other means, if possible.”

Despite the fact the UK and European regulators still consider genome editing as GM, in many countries, including India, China and the US, similar genome editing techniques that don’t insert any foreign DNA – so called SDN1 and SDN2 categories – have already been cleared for use by plant and animal breeders.

This deletion strategy offers a transgene-free route to engineering traits that rely on switching genes on, such as crops producing high lipid feed stuffs for sheep and cattle, said Professor Eastmond.

Studies suggest higher dietary lipid concentrations in cattle can reduce methane emissions by up to five percent for each one percent increase in lipid content.

Working in the model plant species, Arabidopsis, the team fused the promoter of a non-essential gene that’s switched on in leaves, to the DGAT2 gene that’s normally switched off - resulting in the leaves accumulating vegetable oil.

DGAT2 makes an enzyme that is known to synthesise triacylglycerol and its overexpression is sufficient to drive increased oil production.

Using CRISPR/Cas9, the team made cuts at either end of the stretch of DNA that separates DGAT2 and the gene promoter and the plant joined the cut ends.

DGAT2 expression in the leaves was enhanced more than twenty-fold and the triacylglycerol oil content increased by around thirty-fold.

The modified expression pattern of DGAT2 across leaf, stem, root, flower, and seed pod tissues also mirrored that of the gene from which the promoter was taken.

“The increase in leaf total lipid content that we achieve here, without inserting foreign DNA, is likely sufficient to significantly enhance productivity and reduce methane emissions from cattle and sheep if replicated in pastures. We know that is true as it has recently been shown using a GMO approach,” said Professor Eastmond.

Rothamsted Research is the longest-running agricultural research institute in the world. We work from gene to field with a proud history of ground-breaking discoveries, from crop treatment to crop protection, from statistical interpretation to soils management. Our founders, in 1843, were the pioneers of modern agriculture, and we are known for our imaginative science and our collaborative influence on fresh thinking and farming practices.

Through independent science and innovation, we make significant contributions to improving agri-food systems in the UK and internationally. In terms of the institute’s economic contribution, the cumulative impact of our work in the UK was calculated to exceed £3000 million a year in 20151. Our strength lies in our systems approach, which combines science and strategic research, interdisciplinary teams and partnerships.

Rothamsted is also home to three unique resources. These National Capabilities are open to researchers from all over the world: The Long-Term Experiments, Rothamsted Insect Survey and the North Wyke Farm Platform.

We are strategically funded by the Biotechnology and Biological Sciences Research Council (BBSRC), with additional support from other national and international funding streams, and from industry. We are also supported by the Lawes Agricultural Trust (LAT).

The Biotechnology and Biological Sciences Research Council is part of UK Research and Innovation, a non-departmental public body funded by a grant-in-aid from the UK government.

BBSRC invests in world-class bioscience research and training on behalf of the UK public. Our aim is to further scientific knowledge, to promote economic growth, wealth and job creation and to improve quality of life in the UK and beyond.

Funded by government, BBSRC invested £469 million in world-class bioscience in 2016-17. We support research and training in universities and strategically funded institutes. BBSRC research and the people we fund are helping society to meet major challenges, including food security, green energy and healthier, longer lives. Our investments underpin important UK economic sectors, such as farming, food, industrial biotechnology and pharmaceuticals.

The Lawes Agricultural Trust, established in 1889 by Sir John Bennet Lawes, supports Rothamsted Research’s national and international agricultural science through the provision of land, facilities and funding. LAT, a charitable trust, owns the estates at Harpenden and Broom's Barn, including many of the buildings used by Rothamsted Research. LAT provides an annual research grant to the Director, accommodation for nearly 200 people, and support for fellowships for young scientists from developing countries. LAT also makes capital grants to help modernise facilities at Rothamsted, or invests in new buildings.