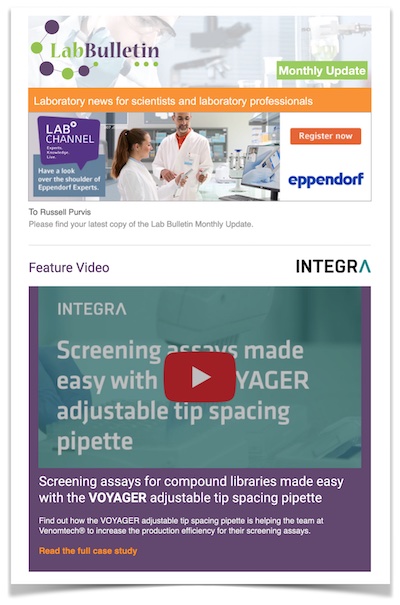 A promising new approach to potentially treat Alzheimer’s disease – and also vaccinate against it – has been developed by a team of UK and German scientists.

Both the antibody-based treatment and the protein-based vaccine developed by the team reduced Alzheimer’s symptoms in mouse models of the disease. The research is published today in Molecular Psychiatry.

The work is a collaboration between researchers at the University of Leicester, the University Medical Center Göttingen and the medical research charity LifeArc.

Rather than focus on the amyloid beta protein in plaques in the brain, which are commonly associated with Alzheimer’s disease, the antibody and vaccine both target a different soluble – form of the protein, that is thought to be highly toxic.

Amyloid beta protein naturally exists as highly flexible, string-like molecules in solution, which can join together to form fibres and plaques.  In Alzheimer’s disease, a high proportion of these string-like molecules become shortened or ‘truncated’, and some scientists now think that these forms are key to the development and progression of the disease.

Professor Thomas Bayer, from the University Medical Center Göttingen, said: “In clinical trials, none of the potential treatments which dissolve amyloid plaques in the brain have shown much success in terms of reducing Alzheimer’s symptoms. Some have even shown negative side effects. So, we decided on a different approach. We identified an antibody in mice that would neutralise the truncated forms of soluble amyloid beta, but would not bind either to normal forms of the protein or to the plaques.”

Dr Preeti Bakrania and colleagues from LifeArc adapted this antibody so a human immune system wouldn’t recognise it as foreign and would accept it. When the Leicester research group looked at how and where this ‘humanised’ antibody, called TAP01_04, was binding to the truncated form of amyloid beta, the team had a surprise. They saw the amyloid beta protein was folded back on itself, in a hairpin-shaped structure.

Professor Mark Carr, from the Leicester Institute of Structural and Chemical Biology at the University of Leicester, explained: “This structure had never been seen before in amyloid beta. However, discovering such a definite structure allowed the team to engineer this region of the protein to stabilise the hairpin shape and bind to the antibody in the same way. Our idea was that this engineered form of amyloid beta could potentially be used as a vaccine, to trigger someone’s immune system to make TAP01_04 type antibodies.”

When the team tested the engineered amyloid beta protein in mice, they found that mice that received this 'vaccine' did produce TAP01 antibodies.

The Göttingen group then tested both the ‘humanised’ antibody and the engineered amyloid beta vaccine, called TAPAS, in two different mouse models of Alzheimer’s disease. Based on similar imaging techniques to those used to diagnose Alzheimer’s in humans, they found that both the antibody and the vaccine helped to restore neuron function, increase glucose metabolism in the brain, restore memory loss and – even though they weren’t directly targeted - reduce amyloid beta plaque formation.

LifeArc’s Dr Bakrania said: ‘’The TAP01_04 humanised antibody and the TAPAS vaccine are very different to previous antibodies or vaccines for Alzheimer’s disease that have been tested in clinical trials, because they target a different form of the protein. This makes them really promising as a potential treatment for the disease either as a therapeutic antibody or a vaccine. The results so far are very exciting and testament to the scientific expertise of the team. If the treatment does prove successful, it could transform the lives of many patients.”

Professor Mark Carr added: “While the science is currently still at an early stage, if these results were to be replicated in human clinical trials, then it could be transformative. It opens up the possibility to not only treat Alzheimer’s once symptoms are detected, but also to potentially vaccinate against the disease before symptoms appear.”