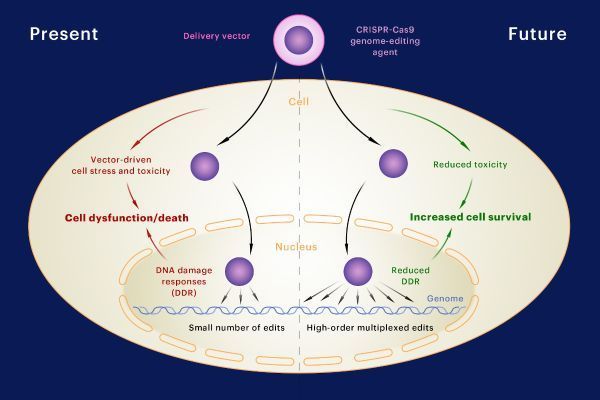 The Wyss Institute for Biologically Inspired Engineering at Harvard University and Cytosurge AG, a company manufacturing unique high-precision nanotechnology instruments, have announced that they will collaboratively investigate CRISPR-based approaches to more effectively introduce multiple edits into the genome of single cells, while minimizing CRISPR-related toxicity. This capability could become instrumental in driving forward diverse large-scale efforts such as the engineering of cell lines for pharmaceutical, clinical and biotechnological applications, transplantable immune-compatible pig organs, and the resurrection of extinct species.

The CRISPR system with its ability to precisely manipulate the DNA sequences of cells to repair dysfunctional genes, and alter the fates of cells and traits of entire organisms, has tremendous potential for curing diseases and understanding the biology underlying normal and disease-related traits. However, key challenges such as cell toxicity caused by damage to the cell’s DNA due to unspecific activity of the CRISPR-Cas9 enzyme, and the stress and toxicity caused by the intracellular delivery of the editing reagents, remain to be solved. These problems are amplified in cases where multiple changes need to be edited into a single cell’s genome to engineer transplantable tissues or model complex diseases and stand in the way of harnessing the CRISPR system’s full potential.

“Especially when it comes to the manipulation of cells with entire sets of genome edits in more comprehensive approaches, we still have to improve our ability to maintain the viability and health of cells, and read out the success and effects that every individual edit has,” said George Church, Ph.D., who is a Founding Core Faculty member at the Wyss Institute and Lead of its Synthetic Biology focus area. “Cytosurge’s cell manipulation platform with its cell injection and sampling capabilities that themselves don’t harm cells offers us an entry point into this complex analysis and could help us dramatically expand the multiplexing potential of the CRISPR system longer-term.”

Church also is Professor of Genetics at Harvard Medical School (HMS) and of Health Sciences and Technology at Harvard and the Massachusetts Institute of Technology (MIT). The development of CRISPR technology has long been a focus in his research group at the Wyss Institute and HMS with multiple key breakthroughs in the genome editing field that also led to the formation of several startup companies, including Editas Medicine and eGenesis, which are now developing gene therapy and organ transplant solutions for unmet medical problems.

In CRISPR-mediated genome editing, the programmable CRISPR-Cas9 and related enzymes are guided to specific sequences in the genome by short “guide RNAs” (gRNAs) and use their DNA endonuclease activity to cut the DNA double strand with surgical precision. In the presence of a partially homologous “DNA repair template,” the natural “homology-directed repair” mechanism of the cell then can write the changes contained in the template into the genome. Although work in a number of research labs has dramatically enhanced the efficacy and fidelity of CRISPR-mediated genome editing at individual target sequences, the introduction of large numbers of edits into the cells remains a difficult obstacle. Highly multiplexed genome editing poses distinct challenges, arising from the toxicity due to DNA damage (genotoxicity) during multiple edits, and the toxicity to other parts of the cells caused by current CRISPR delivery methods (cytotoxicity). This practical limit prevents researchers today from engineering cells with highly multiplexed gRNAs, for example, to develop a complex trait that is under the control of many genes, or model a complex genetic disease.

The research collaboration between the Wyss Institute and Cytosurge, spearheaded by Soufiane Aboulhouda, a Ph.D. candidate working with Church, and Wyss Institute Technology Development Fellow David Thompson, Ph.D., at the Wyss Institute, will investigate the consequences of introducing entire collections of gRNAs into single cells by leveraging Cytosurge’s FluidFM technology.

The FluidFM BIO Series combines the world’s smallest syringe with sensitive force feedback and easy point & click operation. This allows it to reliably and gently inject material into either cell plasma or nucleus while keeping the cells alive and intact. FluidFM will enable researchers to precisely inject the enzymatic CRISPR-Cas9 enzyme and multiple gRNAs at defined concentrations – and at measurable volumes - into the cytoplasm or nuclei of single cells. Multiple gRNAs can either be introduced simultaneously or stacked over several cycles. At a later step the resulting cell lines can be analyzed, or cell material can be extracted from individual cells for single cell analysis, including mRNAs that are transcribed from edited genes.

Cytosurge’s CEO, Pascal Behr, Ph.D., is looking forward to the collaboration: “We take great pride in this new collaboration with the Wyss Institute and the group of George Church. As a Switzerland-based university spin-off company, we share the same mindset as the Wyss institute with respect to its highly application-focused research strategy. The opportunity to further push the boundaries of genetic engineering and the CRISPR system is very exciting and motivating for us as a company. We are therefore looking forward to enabling new scientific discoveries and ultimately benefiting patients’ well-being in the future by combining the capabilities of our FluidFM technology and the expertise and vision of our partners at the Wyss institute."

Thus, by performing a systematic analysis of markers for cell viability and gene expression changes caused by gRNAs nano-injected into single cells, the collaboration aims to develop enhanced delivery strategies for multiple gRNAs, and to discover rules that help minimize toxicity related to the CRISPR system and cell manipulation methods, while at the same time enabling effective multiplexed gene editing.

"This collaboration between George Church and his team at the Wyss Institute’s Synthetic Biology platform and Cytosurge could help remove a major roadblock in the CRISPR genome engineering field and, if successful, allow researchers to reengineer cells and tissues in ways that up to now have been impossible,” said Wyss Institute Founding Director Donald Ingber, M.D., Ph.D., who is also the Judah Folkman Professor of Vascular Biology at HMS and the Vascular Biology Program at Boston Children’s Hospital, as well as Professor of Bioengineering at the Harvard John A. Paulson School of Engineering and Applied Sciences.

About The Wyss Institute for Biologically Inspired Engineering at Harvard University.

Cytosurge brings with its FluidFM solutions significant benefits to a wide range of applications in life sciences, biophysics and mechanobiology. Unique benefits include quantitative volume measurements of injected compounds during drug development, improved CRISPR gene editing by direct delivery into the nucleus, isolation of selected cells directly from culture, 2.5D nano-printing down to sub-micron levels or single cell adhesion and colloidal probe measurements.

Cytosurge AG develops, manufactures and distributes state-of-the-art nanotechnology solutions and systems based on its patented FluidFM® technology. At the heart of the technology are the hollow FluidFM probes which have apertures down to 300 nm enabling the handling of femtoliter volumes.