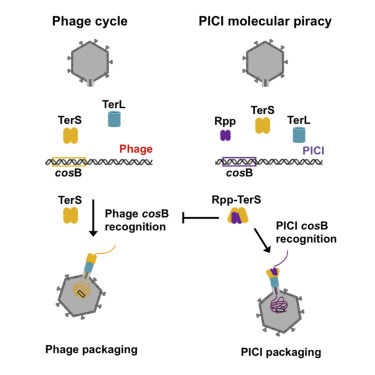 Scientists at the University of Glasgow have found a new paradigm in the understanding of bacterial evolution – an important element in the wider context of antibiotic resistance.

The ability of most bacterial pathogens to cause disease depends on the presence of a class of genetic elements called “pathogenicity islands”. This new research – published in Molecular Cell – reveals how these pathogenicity islands hijack viruses to spread in nature, transforming non-pathogenic bacteria into virulent.

The scientists describe the move of these pathogenetic islands – found in the chromosomes of a bug, or bacteria – as “hijacking the hijackers”. This previously-unknown mechanism is thought to be widespread in nature.

The pathogenicity islands studied are called Phage-Inducible Chromosomal Islands – or PICIs – which represent a novel family of mobile genetic elements, present in pathogenic bacteria, which play an important role in bacterial evolution and antimicrobial resistance.

These PICIs are clinically important because they carry and disseminate virulence and antibiotic-resistant genes. Consequently, the transfer of these elements greatly impacts on the emergence of increasingly virulent and resistant bugs.

Professor José R Penades, from the University’s Institute of Infection, Immunity and Inflammation, said: “In our discovery, we have seen how pathogenicity islands hijack and block their helper virus, using the virus for themselves to move.

“These pathogenicity islands are smart. One reason they can move so quickly is because they can sense nearby viruses and hijack them. Essentially, we have found another way that bacterial bugs evolve, in what is a very clever mechanism.”

One human health condition in which pathogenetic islands are found is Toxic Shock Syndrome.

This discovery could help scientists better understand how antibiotic resistant bugs evolve and inform further crucial research in this area.

The paper, ‘Hijacking the hijackers: Escherichia coli pathogenicity islands redirect helper phage packaging for their own benefit’ is published in Molecular Cell. The work was funded by the Medical Research Council (MRC), the Biotechnology and Biological Services Research Council (BBSRC), the Wellcome Trust and the ERC Advanced Grant program.