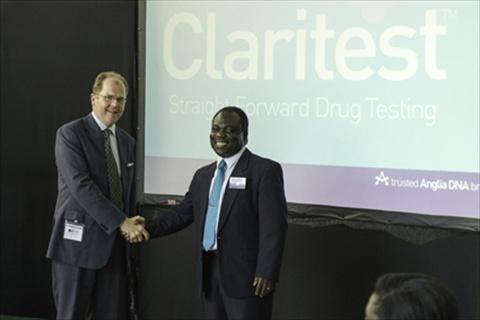 Evidence of drugs usage captured in strands of hair is to be used as part of Claritest, a new drug and alcohol testing service which has been launched by Anglia DNA, based on the Norwich Research Park.

It is the only laboratory of its kind in the East of England to offer the service, which will offer rapid screening of hair and fluid samples.  The new laboratory was opened by George Freeman MP for Mid-Norfolk on 15th June 2012.

"Hair grows about a centimetre a month, so taking a 3cm sample of hair cut close to the scalp will show drug and alcohol usage patterns over the last 3 months. The root of the hair absorbs traces of the drug from the blood stream so the person needs to have actively taken the substance for it to show in the hair."

"The benefit of the Claritest service is that it will provide an objective assessment of the person's drug habits.  This can be used, for example, to support claims by a parent in a custody battle that they are now clean, or to allow an employer to introduce random screening in situations where drug usage can cause a risk to public safety."

Being in employment is recognised as having a key role in achieving and sustaining recovery for people with drug problems. But evidence from the recent UKDPC research* found recovering users are heavily stigmatised and face considerable barriers to re-entering the workforce. The hair test could help by providing evidence of an individual's commitment to rehabilitation.

The new service has been welcomed by solicitor Sandra Nunn, a Principal at Norwich-based Cozens-Hardy LLP, who explains that testing is helpful when it is one person's word against another.

"If we have a case where a client feels they have been wrongly accused of drug or alcohol misuse then this testing service will be very useful."

Anglia DNA have invested £500,000 in developing the new drug testing laboratory at the Norwich Research Park and will be expanding its workforce to meet demand.

The company also specialises in DNA testing for legal purposes and has produced an innovative over-the-counter paternity testing kit.  DNA testing is typically required in family law, child support, immigration and for probate.

"Clients said they valued our responsive service and suggested that we expanded our portfolio to include testing for substance abuse in hair, blood, urine and saliva. This gave us confidence that there would be market demand for the new service.

Drugs are only detectable in blood or urine for a few days or weeks, but hair provides a drugs history for several months and this can be used as the basis of a screening service for workplaces, rehabilitation clinics and sporting bodies.

"I know from my work on the board of the NRP ‘Iceni' Start-up fund what an excellent business this is.  Having raised over £500,000, with plans for additional investment and growth and overseas exports, Anglia DNA shows how ‘the appliance of science' can be used to develop pioneering new products and services.

"Anglia's successful expansion on the Norwich Research Park is a tribute to the potential of the NRP to not just contribute to, but lead, a sustainable economic recovery in the UK.  That's why I am determined to continue my work in Parliament highlighting the importance of the NRP and Norfolk's science base to our future economic prosperity."

Professor Andrew Stewart Coats, Norwich Research Park CEO, said: "Anglia DNA is a good example of the type of science-based companies that we want to attract and nurture on the Norwich Research Park.  The company aims to employ 100 people in the next 10 years and we are pleased to see it prosper."

Employers have legal obligations under the Health and Safety at Work Act and it is a criminal offence for certain workers in safety-critical occupations to be unfit through drugs and or drink.  It is advised that all employers have a drugs policy that is drawn up with employee consultation and increasingly this will include drug screening.

Anglia DNA Services Limited is a leading DNA testing laboratory based at the Norwich Research Park. Established by Dr Thomas Haizel in 2004, Anglia DNA specialises in DNA testing for legal purposes, where it is typically required in family law, child support, immigration and probate.

In 2005, the laboratory became accredited by the United Kingdom Accreditation Service to ISO 17025, International Standard for paternity, maternity, family relationship and sibling testing; shortly followed by accreditation from the Ministry of Justice to carry out parentage tests directed by the civil courts in England and Wales under section 20 of the Family Law Act 1969